Existence and disappearance: On documentation, the un-real image, and surveillance as a biopolitical weapon against Palestinian life in Basel Abbas and Ruanne Abou-Rahme’s At Those Terrifying Frontiers 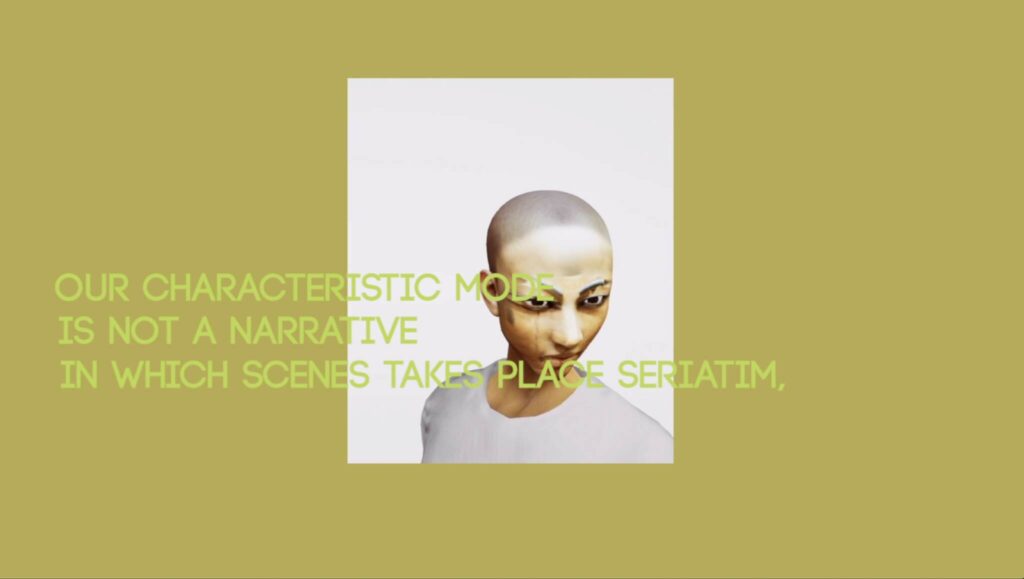 Basel Abbas and Ruanne Abou-Rahme’s At Those Terrifying Frontiers Where the Existence and Disappearance of People Fade Into Each Other (2019) is driven by this tension. The work comprises layers of imagery, each radiating out from the shared origin point of the Great March of Return, a series of demonstrations held on the Gaza-Israel border that lasted eighteen months and demanded Palestinian refugees’ right to return to the occupied land. The first layer of imagery is the work’s most directly testimonial: footage shot on the Gaza Strip, the protest site. Filmed at night from a moving car, the border walls are merely glimpsed, yet the structure feels pervasive. Text from Edward Said’s After the Last Sky, his reflections on Palestinian identity, unfolds atop in poetic rhythm and is echoed in lamenting song.

Said’s text reads: “the images used to represent us only diminish our reality more.” The final layer of imagery confronts the idea of un-reality referenced by Said. Using software that generates digital avatars from still images, the faces of protesters are rendered digitally. They are uncanny, their heads swivel on their fabricated bodies like newborns struggling with the weight of their own skulls. In their striking un-reality, the faces dismantle any sense of the real that images often declare to possess, especially images created and disseminated within Western frames of documentation such as news broadcasts. Terrifying Frontiers collides the legal nonexistence of being undocumented with virtual existence in a method of documentation that refuses, outright, any claims of the real in its representation.

These images exist at another border. In ‘Necropolitics,’ Achille Mbembe accounts for a new kind of social existence experienced by displaced people: living death 1 . Forces of necropower, the various weapons deployed to ensure maximum destruction of a people, confer on a population the status of living dead (accordingly, Mbembe points to the contemporary colonial occupation of Palestine as necropower in its most accomplished form). The digitally rendered faces are both human and not-human, real and un-real, alive yet not conscious. The uncanniness of the images invokes a haunting, the composition beset by its referent. These images do not just ask us to witness the existence of these people, they acknowledge the conditions of this existence. The work does not show us people as filmed on the Gaza border but people on the border of existence itself.

Is there a wholly sufficient visual language that resolves the contradictions of representing the displaced? Will there ever be? In Terrifying Frontiers, Said’s words flicker, making reference to “a language not fully formed.” When philosopher Gilles Deleuze speculated on cinema’s ability to account for displaced people, he stated: “if there were a modern political cinema, it would be on this basis: the people no longer exist, or not yet…the people are missing.” 2 When the coloniser claims that there have never been people on a land, as Deleuze states, he commences the erasure of that people. Thus, political art must contribute to reaffirming their presence. Terrifying Frontiers’ digitally rendered faces forge a people anew, constructing their presence within a new digital realm where their dislocation from their original land is reinforced by their means of representation. They are accounted for yet still missing.

And yet, something else is missing. The work complicates its own process of invention. The digital avatars are generated from low-resolution images circulated online. Accordingly, these images are imperfect, inexact, they are missing data. The lack of data causes the algorithm to speculate, to try to make sense of the absence. The faces bear the result of this conjecture—they are afflicted by visible anomalies, portions of skin appear fragmented, like digital scar tissue. The avatars being unrecognisable from their source fulfils the artists’ ethical obligation, circumnavigating any identifiable material that could be exploited by the protestors’ persecutors. But this method of representation goes beyond safety tactics, for the deployment of the algorithm does not just disguise, it disfigures. Expressed through the pixelated bruises and wounds is the violence of Artificial Intelligence.

Structural violence is not only replicated by the architecture of the digital sphere, it is advanced and upheld by it. Vast quantities of data, most of which are input by users within infrastructures of platform capitalism, enable the creation of algorithmically generated artificial knowledge. Images within this matrix, such as still captures of participants in protests, are forever subject to datafication, a process that has proved particularly useful for warfare. Surveillance technology and networked weaponry operate in our world like types of high-speed, high-performance necropower.

In the last few years, the Israeli Defence Forces have installed networks of facial recognition technology to engage in mass surveillance of Palestinians throughout the West Bank. 3 The people may be missing, but as much as Artificial Intelligence can redress their erasure, it can also seek them out to ensure they remain missing. Terrifying Frontiers not only reminds us of this reality, it accounts for it visually. The work demonstrates the contradictions of the depiction of displaced people by inscribing those contradictions in the image itself. In an era of unrelenting visual documentation and big data, the work demonstrates that the existence and disappearance of people fade into each other ever-rapidly, and in ever more complex and merciless ways.

Jessica McGoff is a film writer and video essayist. Having studied film theory at the University of Glasgow, and further at the University of Amsterdam, she has continued to write about film and create audiovisual essays. Her written work has been published in MUBI Notebook, Another Gaze and CinemaScope, and her video essays have been commissioned by Sight & Sound and the International Film Festival Rotterdam. Recently, she has also curated a programme for Glasgow Short Film Festival. Jessica is interested in female authorship in film, and forms of the moving image that have anti-capitalist and anti-patriarchal potentials.