Of mountains and melodies: On sound, tradition, and community in Izza Génini’s Rhythms of Marrakech 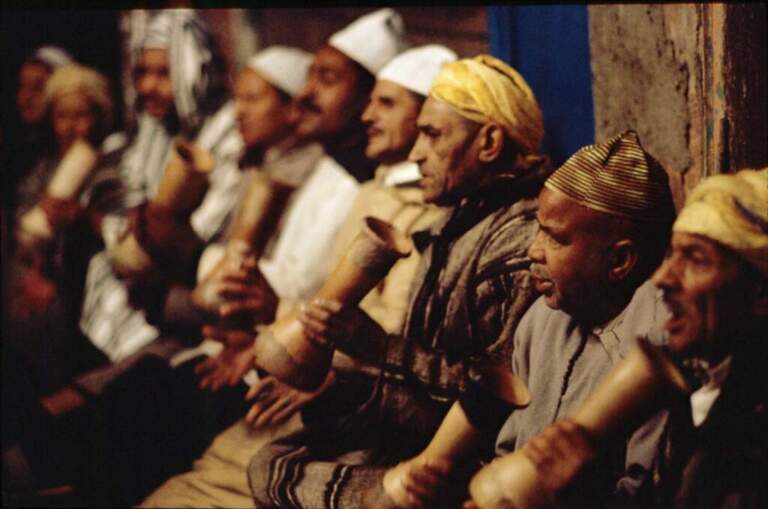 “Condemned to work far away from you, my heart shakes. Far from my family, the fire of separation burns me.” These are some of the opening lyrics sung in Izza Génini’s Rhythms of Marrakech (1989) against the backdrop of the stoic Atlas mountains, the singer’s voice guiding us from the landscape’s quiet hum to the bustle of the city. The documentaries of Izza Génini reflect the artist’s deep and complex relationship with Moroccan traditions. Her film Rhythms of Marrakech, which made its UK debut as part of Berwick Film & Media Arts Festival in 2020, is a celebration of Morrocan culture through the music-making of its people.

The film follows the inhabitants of Marrakech during Achoura, when large groups gather around the city to celebrate the birth of the Prophet Mohammed. This introspective look at the festival is a celebration of Morrocan culture and traditions through the experiences of those who live in ‘the red city’. Génini foregrounds how music is a key element of Moroccan culture. It’s an ever-present breath throughout the film, with the rhythms clapped and melodies sung acting as the collective heartbeat of the Moroccan people. Throughout the film, the inhabitants of Marrakech sing and celebrate together with unadulterated joy. We see groups of women dancing, men singing and drumming—the music flowing through their bodies and reverberating within the walls of the ancient city.

Génini, who was born in Casablanca, moved to France and returned to Morocco later in life, makes films that touch on themes of identity and heritage, presenting Morocco as a country of crossroads where different languages, religions and cultures meet within the city walls. Moroccan culture is unlike any other and Génini’s films convey this in a way that is compassionately observant. Génini captures a city connected through music without shying away from its quieter moments whose tenderness she accepts with open arms, allowing their gentleness to emphasise the glittering of the city at night.

The music captured in Rhythms of Marrakech is used as an offering during celebrations. A viewer cannot help but feel the energy of the collective music-making and yearn to be part of it. This yearning is omnipresent as Génini places music at the epicentre of the film, emphasising its role within the society as a whole. While the melodies sung are integral to the religious importance of the festival, the soundscape of a thousand voices, hands and feet acts as a form of worshipping human experience itself. This suggests a truth present in many cultures where musicians are held in high esteem: Music is not bound to those who study it, it is a force as present in the human psyche as the mountains are in the landscape.

Génini’s work explores diasporic identity in multiple senses, observing the idea of belonging in a geographical sense, as well as a spiritual one. Throughout Rhythms of Marrakech, we are constantly moving, from city streets to the fields surrounding the Atlas mountains back to the city. Our perspective flows naturally. We watch a woman dance, children playing and crowds in the market of Jamaa El-Fna with the ecstasy of the night pouring out of the screen. The focus shifts from the collective to a tender look at an individual, or the North African sky, maintaining the same sense of love and respect throughout.

Rhythms of Marrakech follows a glorious moment in time—a joyous celebration of Moroccan culture and community and yet, viewed now, it is somehow sobering. In the midst of the ongoing pandemic, many of us cannot worship or celebrate with our families in the way we did previously. In such restless times, a collective yearning to be close to one another again—not only to worship or dance together but to simply hold each other—has rendered proximity sacred and underscored its importance to the human experience. Despite the lingering feeling being one of rootlessness, perhaps watching this film in this moment can soothe these pangs of uncertainty. Rhythms of Marrakech can remind us of the joy experienced being around those we love, allowing us to look towards an uncertain future with optimism and a hope of reclaiming those collective rhythms that once guided us. 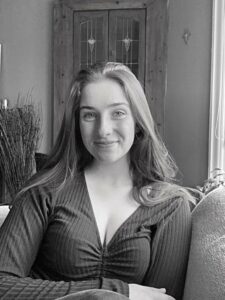 Eilidh Campbell is a singer based in Northumberland, whose work focuses on community outreach and accessibility. She is currently working with The Wilson’s Tales Project and the Radio Rooms on a project exploring the life and work of John Mackay Wilson, the writer of “Wilson’s tales of the Borders”, along with the socio-cultural impact of the writer’s work through music. In 2019, she volunteered at the 15th BFMAF and used her experience at the festival in the research phase of her extended project qualification, a piece of writing exploring whether myths and legends should be used as an artistic stimulus and the cultural importance of folkloric traditions. Eilidh also contributed to the multimedia exhibition “The hurt goes on”, shown at the 2018 festival in partnership with Berwick youth project.