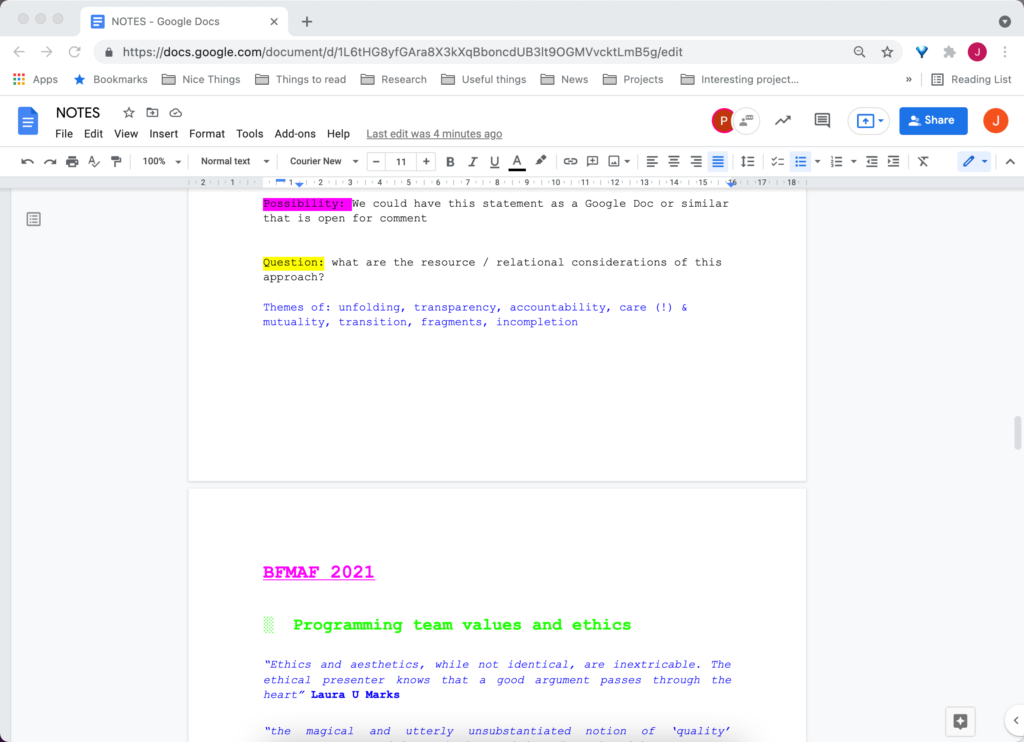 Fragments from documents that guided our planning and programming process are opened out for comment to accredited guests between 15-22 September after which we will host a discussion between Festival Director Peter Taylor, Head of Programming Jemma Desai and writer and programmer Abby Sun reflecting on the collective writing process.

Accredited guests will be able to access the document here from the 15 September, the public event on will take place on the 24 and will be open to all ticket and pass holders.

Abby Sun is an artist, film programmer, and researcher at the MIT Open Documentary Lab, where she is a graduate student in Comparative Media Studies and edits Immerse. Through her work, Abby considers the power dynamics in the documentary form’s inherent smudging of reality, with a particular interest in the media infrastructures and cultural artifacts of moving image exhibition.

Most recently, Abby is the Curator of the DocYard and co-curated My Sight is Lined with Visions: 1990s Asian American Film & Video with Keisha Knight. Expanding on the latter’s programmatic urges, Abby and Keisha launched Line of Sight, a suite of artist development activities, in 2021.

Abby has bylines in Film Comment, Filmmaker Magazine, Film Quarterly, Hyperallergic, and other publications. She has served on juries for Dokufest, Cleveland, Palm Springs, New Orleans, and CAAMfest, as well as nominating committees for the Gotham Awards and Cinema Eye. Abby has reviewed applications for BGDM, NEA, SFFILM, LEF Foundation, Sundance Catalyst, and spoken on and facilitated panels at TIFF, NYFF, and other film festivals. Her latest short film, “Cuba Scalds His Hand” (co-directed with Daniel Garber), premiered at Maryland Film Festival in 2019. Her hometown is Columbia, Missouri, US.

Jemma Desai is this year’s BFMAF Head of Programming