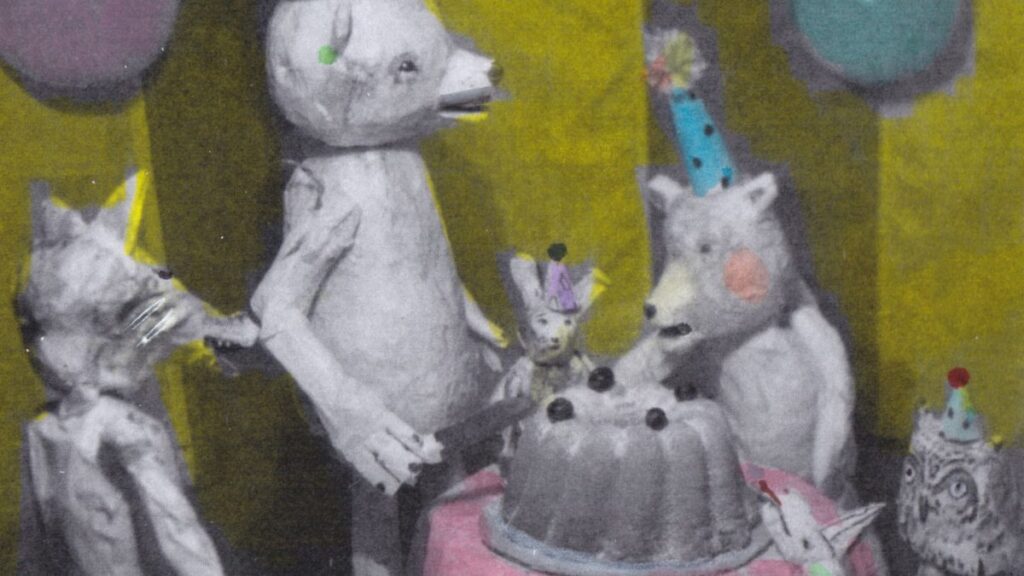 “Nothing could alter the calm of the forest… or so it seemed”. Strange Creatures is a beautifully stylistic papier-mâché animation which can be understood as a modern fable. The film is the first collaboration between Cristóbal Léon—who has made a number of successful short and feature films over the past years in collaboration with Joaquín Cociña—and illustrator and animator Cristina Sitja. It is an adaptation of Sitja’s 2014 children’s book of the same title (Extrañas Criaturas in Spanish) in which she wanted to talk about the effects of human actions on nature.

The film begins in the idyllic forest, with all the creatures—bears, birds and bunnies—enjoying each others’ company in harmony. Frolicking in the grass or eating communally, they share joyous moments together within the safety and comfort of their environment. Until one day, they return from an outing to find the forest cleared and their home destroyed. They immediately set about to find a solution, cobbling together a new domicile out of waste materials left by the loggers, but this doesn’t weather the elements. It’s only when they truly encounter the strange creatures of the film’s title— humans—that a solution begins to take shape. They impress on them the importance of the forest and ecosystem, and convince them they all need to work together to create a solution that works for everyone.

Strange Creatures is a fairytale story that is ripped from our current realities of climate change and eco-disaster. The film has relevance for viewers of any age, and by centring its story around the animals in the forest, it demonstrates how we need to work together to make the planet a balanced ecosystem for the benefit of all forms of life. — Herb Shellenberger