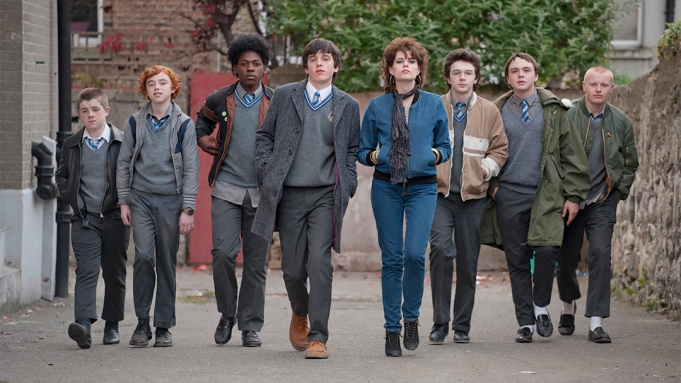 It is 1985, and as part of his struggling family’s efforts to economise, fifteen-year-old Dubliner Conor Lawlor (Ferdia Walsh-Peelo) is taken out of private school and put in a rough, strict Christian Brothers school called Synge Street. Though relentlessly bullied, Conor quickly finds his crowd here, forming a band to impress the mysterious older girl (Lucy Boynton) across the road. It works, though as Conor gets closer to ‘Raphina’ and the band gets better and better, things at home continue to deteriorate, his parents threatening to split up. Music becomes Conor’s only means of escape.

Like me, director John Carney is a confirmed believer in music’s power to unite people. In his first film, Once (2007), it is music that brings our Dublin busker and Czech flower seller together; in his second, Begin Again (2013), it is music, again, that reconciles our disaster of an A&R man with his estranged family. However, in the case of his ’80s-set third effort, Sing Street, the stakes are a little higher, the music having to bridge not just family and class divides, but geopolitical ones too. We are in Troubles-era Ireland, after all.

Rest assured, though, the height of these hurdles makes the music’s ultimate triumph all the more euphoric. Sing Street really is a joy, with one of the best original soundtracks to a pop movie you will ever hear. If you have any love for ’80s music at all, you will love this film. Gather round and watch.-George Cochrane