One morning earlier this summer, during one of any seemingly infinite number of random scrolls through the various feeds connected to my handheld device, I saw a friend posting about a live, online screening of a new film by an artist I wasn’t yet familiar with. Online film screenings, especially during the early Covid-19 lockdown period between the months of March–June 2020, became a regular occurrence effectively for the first time. As a consequence, the excitement of having open, free, worldwide access to this new and much-needed form of collective film culture was tempered by the practical fact that there were still time zones to reckon with. By the time I woke up in London, I realised the screening had already occurred just a few hours before. I decided to send an email to the artist Tiffany Sia to check if I could watch the film another way.

That email sent on 12 June—three months to the day in which I’m writing this essay, 12 September, currently at 2:35AM, woefully past deadline and just days before our festival launches—set off a chain of conversation that has led to this writing and the programme on Tiffany Sia’s work at Berwick Film & Media Arts Festival that it belongs to. It also led me to the realisation that Sia is one of the rare individuals whose deep-seeded commitments—to radicality and political action; to humour and satire; to unfiltered and graphic sexuality; to artistic expression; and to unblemished humanity—are legion.

With this text, I’d like to use my words to draw a diagram of all the overlapping areas of Tiffany Sia’s diverse activities, as they all feed into one another to produce a hulking mass of activity and information that a viewer can follow, learn from, interact with and even contribute to. Though I will touch on Sia’s writing, producing, residency hosting, livestreaming and filmmaking, it would be a failure not to mention the single, overarching and unifying activity between them all. She is a prolific social media poster, synthesising diverse information and delivering it to those following along on the various commodified platforms we all use. Rather than reject the doomscroll—the infinite scroll on our hellish news timeline and feeds full of terrifying information—Sia embraces and rectifies it, publishing her own version and vision of the world towards radical, liberatory and aesthetic truths. 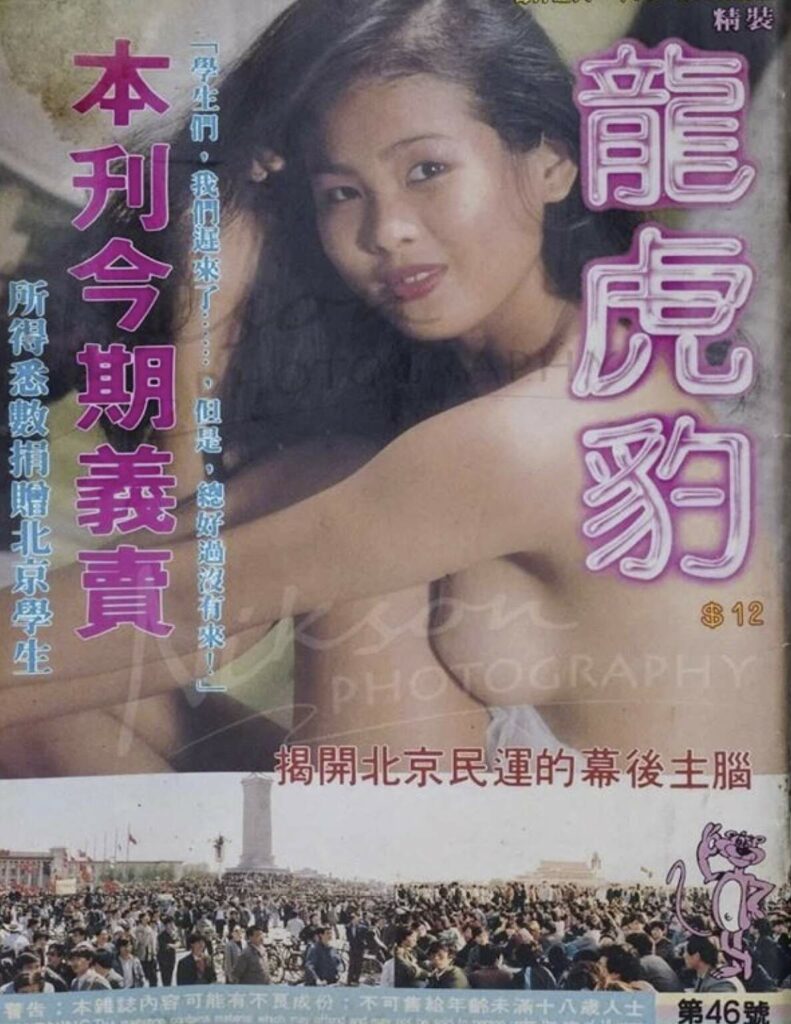 Tiffany Sia’s highly developed and singularly unique writing practice mirrors in several fundamental ways the form, texture and personal/public divide of social media. In 2019, Inpatient Press published her zine Salty Wet, 咸濕, a series of anti-travelogues on distance and desire with and without Hong Kong. The publication exists both as a paper zine and digital PDF (accessible at the Asia Art Archive) and includes screengrabs, texts, tweets and the visual texture of the infinite scroll, with sections and paragraphs divided and images pixelated, blurry or hastily-cropped. The cover of Salty Wet, 咸濕 is appropriated from the cover of a Hong Kong soft-core pornography magazine from 1989, showing a topless centerfold model juxtaposed with a crowd of student protestors in Tiananmen Square. 1 The association between sexuality and radical politics is one way to read this appropriation though I propose a more complex reading. Imagine a reader on the subway with a copy of the zine. Anyone looking at her reading this might think she is just reading vintage pornography, while in actuality the writing and information inside is much more scandalous, shocking and powerful than mere soft-core porn!

On the heels of Salty Wet, 咸濕, the forthcoming book Too Salty Too Wet 更咸更濕 will be published on Sia’s own imprint Speculative Place Press. The book is still actively being written but has still been disseminated in the form of several leaks of material in progress. In February 2020, the first of these leaks was made as a poster-size zine released in an event at Printed Matter in New York. As part of this retrospective for Berwick Film & Media Arts Festival, Sia is publishing Too Salty Too Wet 更咸更濕: Leak as Discharge, a “consensual leak” of material that is companion to her 2020 film Never Rest/Unrest. This specific material is “a retelling of geography that takes aim at the notion of the spectacular”. The reader should note all the different possible meanings of both the words in the appended title. Whistleblowers leak material, authorities discharge protestors unlawfully, pornography gets leaked online, discharge denotes sexual fluids.

Another aspect of Tiffany Sia’s work is the series of livestream readings/performances she delivers titled Hell is a Timeline, yet another reference to and resonance with the doomscroll. The series is delivered through Home Cooking, a geographically-dispersed collective of artists and an open-source digital platform most often accessed through Instagram. Each livestream (or episode) of Hell is a Timeline consists of reading aloud several texts that each accentuate a different theme—episodes include “Fear as a Weapon and a Shadow”, “The Crisis of Our Lived Myths” or “The Violent Fictions of Maps”, for example. Sia sits in front of the (portrait orientation) camera, her face pixelated by the dontlookatme filter, introducing the session, reading at a measured pace and taking liberal gulps of water when necessary. There is little in the way of personal conversation or even expounding on the texts—which range from philosophical treatises to film reviews and history writing—so Hell is a Timeline feels more like a performance than a chat. But reading these texts aloud is ultimately a tool of both pedagogy and care. Sia has spoken about a fantasy that social media influencers would stumble upon these livestreams and perhaps fall headlong into “the discourse” as a result.

Beyond her own creative pursuits, Sia has worked as an with other artists and filmmakers to help them realise their own productions. She worked as executive producer for Adam Khalil & Bayley Sweitzer’s 2018 film Empty Metal (the Opening Night film of BFMAF 2018) and is executive producing Adam Khalil & Zack Khalil’s forthcoming, Sundance Documentary Fund supported documentary Ancestors in the Archives. Beyond this activity, Sia is the founder of Speculative Place, an experimental project space in Hong Kong that hosts a rotating cohort of artists, writers and filmmakers in residence, including artists Carolyn Lazard and Alex Nguyen-Vo. This work and these allegiances are very much in line with the solidarity and support that she lends to many causes, campaigns and protests both locally and internationally.

The intermingling of all these diverse activities creates a hub of action, thinking and connections supported by and channeled through Tiffany Sia. The film Never Rest/Unrest is an important expression—and a significant work in its own right—but it should most clearly be seen within the linkage of all of these other activities, expressions, meetings and ideas. However, paradoxically, through variously, occasionally and effectively employing strategies such as obtrusion, refusal, ambivalence and/or inscrutability, Sia’s work is didactic and political only purely by suggestion. She never delivers anything usable by the state—even the protest footage in Never Rest/Unrest doesn’t show anyone’s faces uncovered, only masked up. In these ways, the artist shadowboxes with the spectre of state terror through a strategy of plausible deniability.

While it might seem curious for a film festival to devote a retrospective to someone who has thus far only directed one film, all the above activities show Never Rest/Unrest to be yet another aspect of a wider practice that defies easy categorisation and expands outward without end. Because the only way to face the infinite doomscroll of hellish news and terrible information is to create one’s own timeline of solidarity, beauty and infinite possibility.

Herb Shellenberger is Programmer for Berwick Film & Media Arts Festival, where he has worked since 2016.