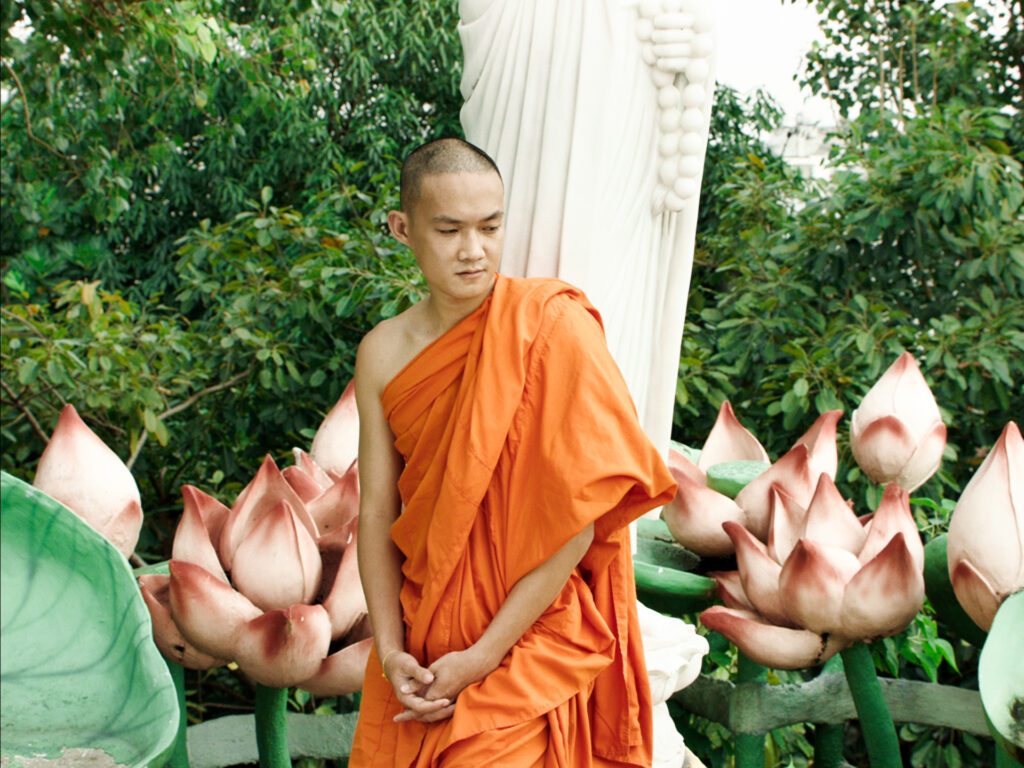 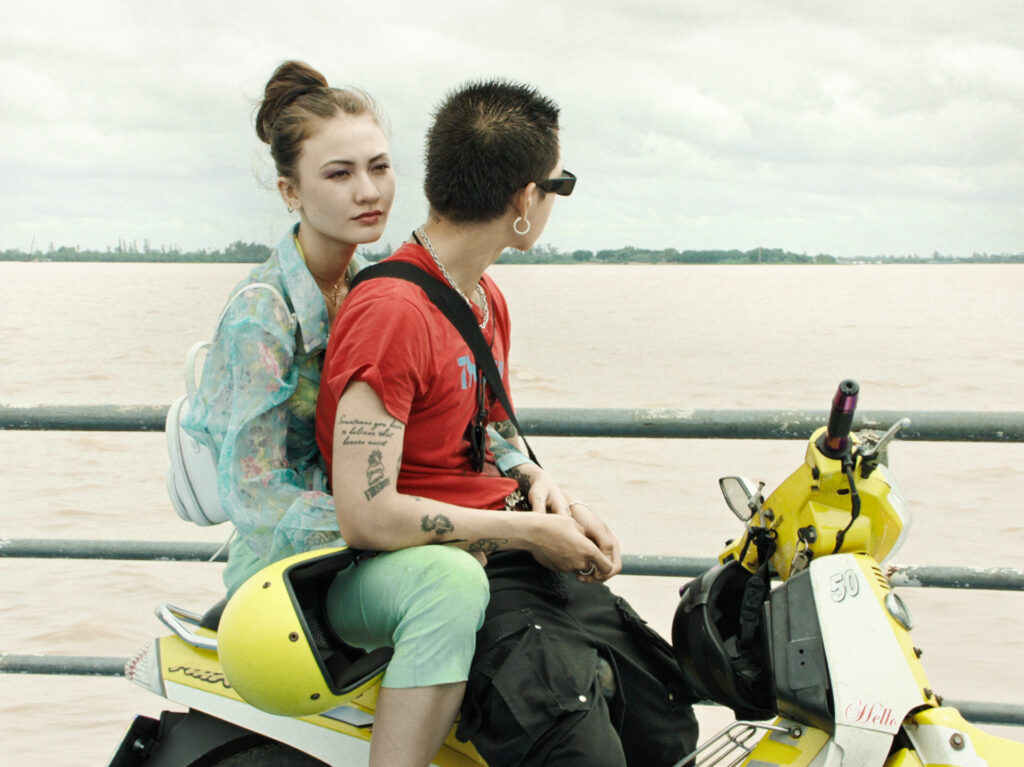 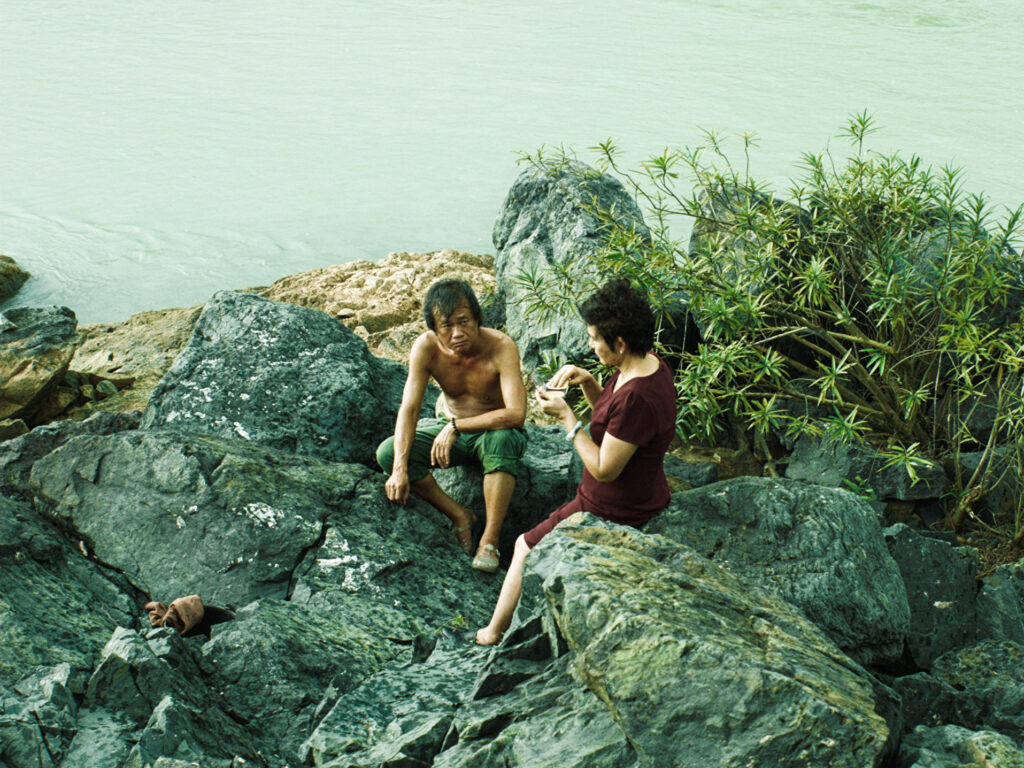 Following on from his widely screened and hugely accomplished 2019 short Blessed Land, Phạm Ngọc Lân’s The Unseen River cements the Vietnamese filmmaker’s place as one of the most bold and unique visionaries of contemporary new cinema. The film explores the magic, beauty and intensity of the Mekong River by following several humans and one animal as they all traverse its banks. A young couple visit a pair of monks in a futuristic temple; two former lovers reunite by chance years after their affair; and a spunky black-and-white dog deftly navigates the river landscape tying them all together. Magic and melodrama mix and meld mellifluously along the Mekong.

Two more “M” words: memory and melancholy. The rushing Mekong is often compared to the flowing of time itself. Yet while time ostensibly flows in a forward direction, we regularly experience currents that drag our memory to and fro, strong pulls of an inescapable undertow lurking beneath the surface. The woman and the fisherman reminisce about their affair 30 years earlier, their conversation about separation, time and loss punctuated by wistful folk music. At the same time, the young, tattooed couple express their difficulty projecting their relationship into the future: “[Our parents] want us to hurry [to get married] but we can’t decide yet. Not because we’re not in love. We just can’t see our future.”

Though the characters express an abundance of uncertainty, Phạm Ngọc Lân’s filmmaking is confidently assured. Gentle, subtly kinetic camera movements seem to guide the viewer along as if by hand, with delicate zooms into the faces of each character conveying their inner emotions better than any dialogue ever could. In a brisk twenty minutes, The Unseen River establishes a remarkably-crafted atmosphere, a minimal yet engrossing narrative and characters who feel fully-fleshed and roundly dimensional. A huge part of that is certainly down to the performances. The woman is played skillfully and to full emotion by veteran film and television actress Minh Châu while the young couple’s naturalistic performances are delivered by creators/influencers Naomi & Wean. The pair also provide the kiss-off of an end credit song, the blustery indie-folk-rap mash-up “Retrograde”. The Unseen River comprises part of Mekong 2030, an anthology film of five shorts from different Mekong region countries produced by Luang Prabang Film Festival in Laos. —Herb Shellenberger

Phạm Ngọc Lân (1986, Vietnam) is a film director with a background in urban planning and architecture, based between Hanoi and North Carolina. Lân’s debut short film The Story of Ones (2011) has been screened in numerous film festivals and art museums, including Visions du Réel (Swizterland), CPH-DOX (Denmark), New Cinema and Contemporary Art – Rencontres Internationales (Paris/Berlin) and Tokyo Metropolitan Museum of Photography. His first two short fiction films, Another City (2016) and Blessed Land (2019) both premiered at the Berlinale Shorts Competition. Lan is currently developing his first feature film Cu Li Never Cries.